MARMELOS RIVER AT ITS BEST 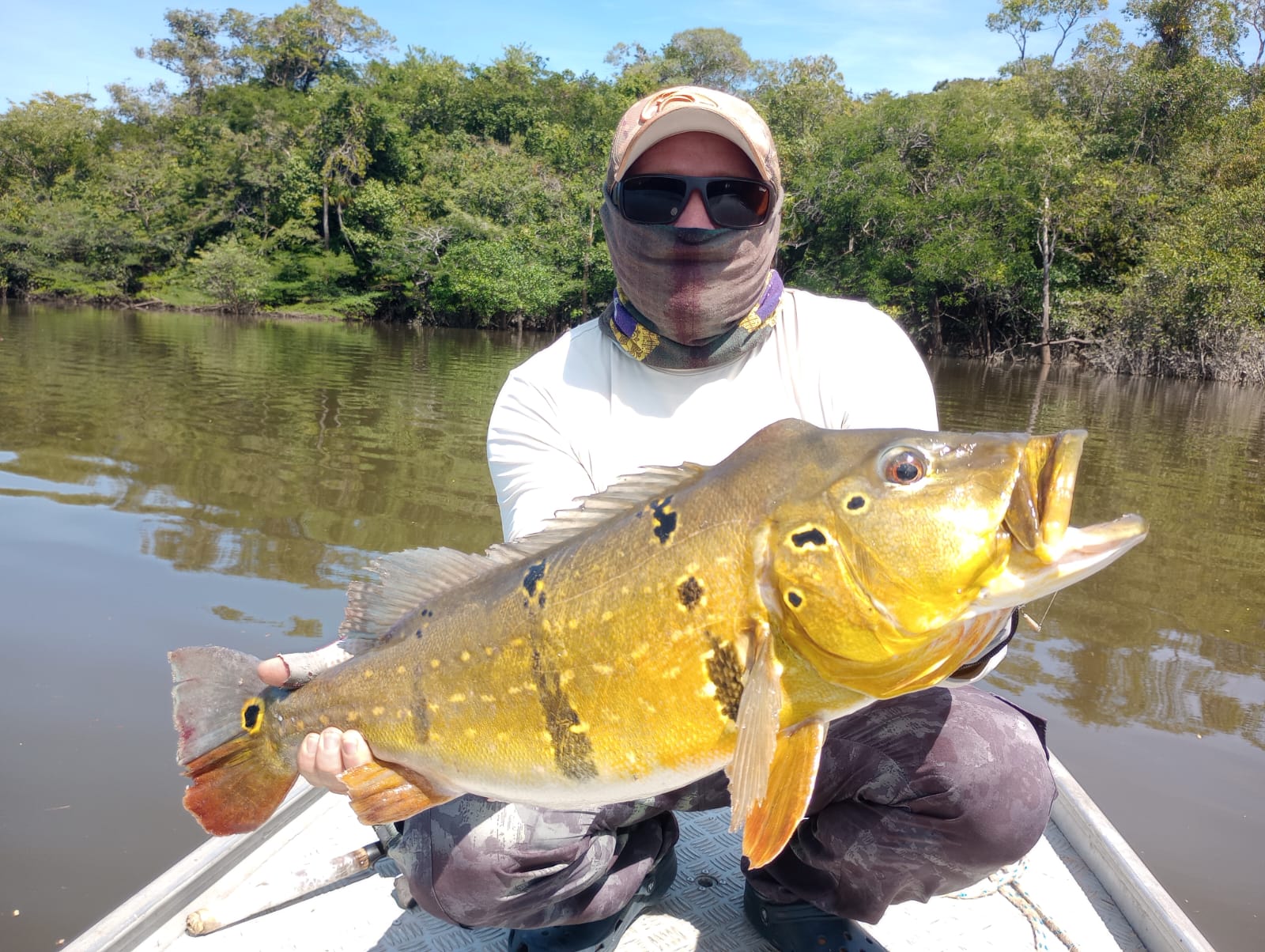 Stats: The big story this week is the landing for 4,741 peacocks by only 14 anglers. That’s an average of 338 fish per angler for the week, 56 per angler per day. That’s a whole lot of catching! The two groups were headed up by D. Lyle, who has fished with us seven times (party of 6), and R. Anderson (party of 8). An impressive 160 of the peacocks caught by the two groups were in the 8- to 16-pound category and three were 17-pounders. One was an 18-pounder (see table below). This tally excludes a wide array of other tropical species such as the matrincha, jacundá, apapá, wolfish, pacú, bicúda, and pirañha.

Water levels on the upper Marmelos private fishery where these groups were fishing were, and remain, good (see below), and fishing should continue to be excellent in this area until we reach our sustainability limit of 56 anglers for this Dry Zone stretch of water. Maintaining this angler limit is important because peacocks are TERRITORIAL. Overfishing an area results in sharply reduced angler success. Currently, the upper Marmelos has been fished by 53 anglers, so next week will be our last week in this fishery for the year. We expect to see great numbers of 20-plus pounders caught at our other private rivers as the season progresses. 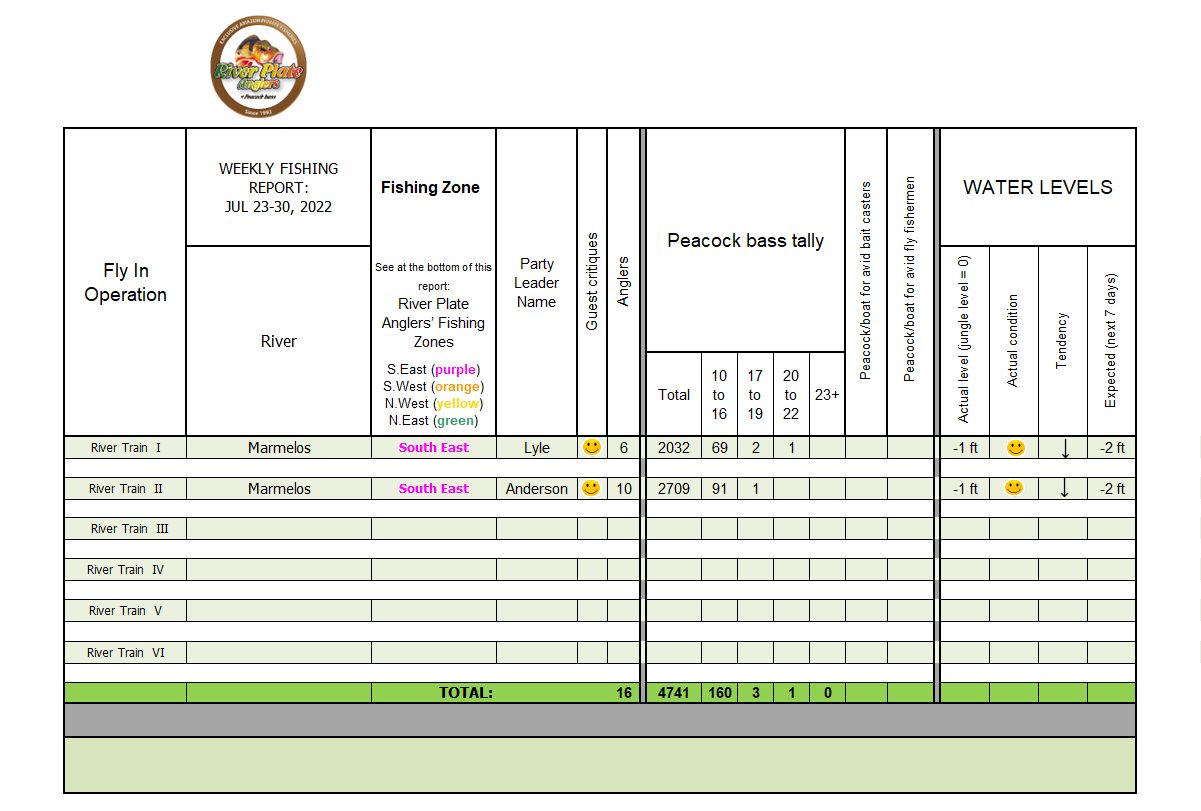 Click on the table to see it full size

We will start fishing a NEW exclusive river this week, The Torrentoso, from our THIRD River Train in this Dry Zone area. At that point, we will have three of our six river trains in operation. Stay tuned for an update on The Torrentoso.

Guesswork: Looking forward, we know incoming anglers are interested in knowing where all six of our River Trains will be operating in the months ahead. The key is expected water levels, of course, across our 10 Private Rivers. River Plate is the only company in the Amazon with enough private waters to move anglers around as needed for optimal conditions. For at least another month, we expect all water levels will continue to be high in our Northern zone and up to 50 miles South of Manaus, as illustrated in the drawing below.

However, in the South East Zone, 350 miles South East of Manaus water levels will continue to drop, as illustrated in the drawing below.

Low water levels in the South East Zone should last until mid-August, after which it may be TOO low for fish to be active. Scroll down to the Fishing Zones map to see in purple the zone we are currently fishing. The Torrentoso River is not shown yet in this zone, because it is our newest private river.

Today’s 10-Day Forecast is as follows (by order of importance): 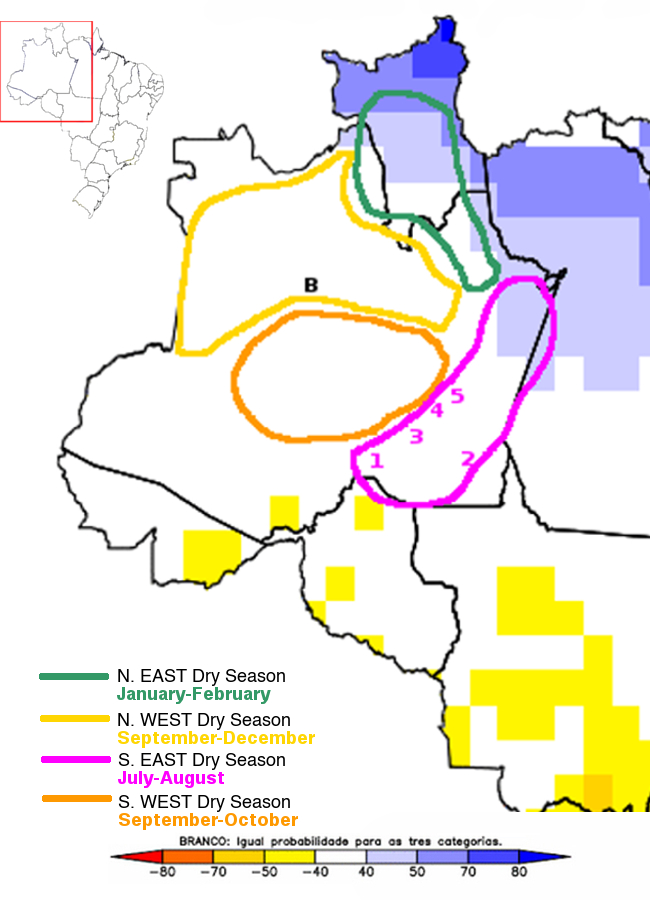 Our water-level predications are not just based on immediate rainfall forecasts but also on longer term (3-month) forecasts for unusual (or what is called anomalous) rainfall across all of our fishing zones. In the above illustration, no unusual rainfall is expected in the white areas for the next 3 months. Note that our current selected fishing area from June to August, the South East Zone, is in white meaning NO unusual rainfall is expected there for the next 3 months. In other words, this zone should receive the expected rainfall for THIS TIME of the year, which is historically very little rain (less than 0.75 inches accumulated in a 10-day period). 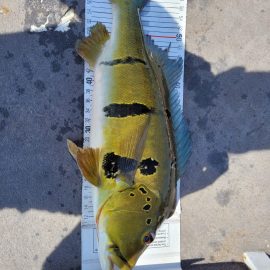