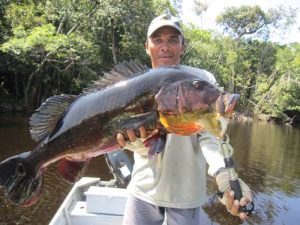 Water levels at the upper Itapará were just perfect and the weather could be described as fully tropical with at least two rain episodes during our fishing hours. The first two days had been very productive but we had only reached the 12lbs mark on three hits.

Over a nightcap, Alejandro, our experienced camp host, dropped the “hidden lagoon” teaser. Naturally our hunter/fisherman curiosity was aroused, but it took more than three Remy Martins to extract a hint from him, literally: “key to success is going counter-intuitive”. Cryptic to say the least.

Next morning before leaving camp, Alejandro instructed our guide Moquim to take us to a couple of hidden lagoons downriver. As the sun started to show behind the tree line we began our amazing trip.

We had a peaceful start with several mid-sized hits and worked our way downriver for two hours. After passing an especially productive bend of the Itapará, Moquim neared the shore and killed the motor. He jumped in the water, which was waist high with his machete in his right hand, (so much for the piranhas, not to mention the feared candirú). He pulled the boat by the bow rope and told us to lay low. The boat floated into the bush, screechy noises of the branches against the aluminum hull filled the air, the machete began to work soon enough and we started to make slow but constant progress into the fresh shadows of the jungle. 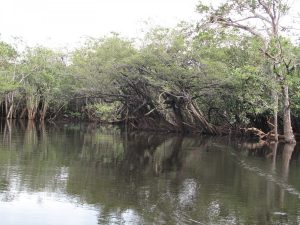 Moquim alerted us to potential snake threat; fortunately enough they only caught on our nerves. After what seemed as an eternity but in reality lasted 15 minutes, a whole new world opened before us. We were looking at a closed and shadowy lagoon, with very still waters, the size of a baseball field, surrounded by tall trees with the hanging lianas touching the water. We had never experienced such an extremely peaceful environment, virginal. It was like peeking into a Pleistocene micro scene.

amazon river fishing peacock bassMoquim boarded the boat again and we stayed there, quite silent / not moving, listening to the primeval jungle sounds while he carefully studied the lake. He cut a sturdy and long bamboo cane and cleaned it. I couldn´t fail noticing that he had not marked our entrance to this micro environment, and I wondered how he would find the way out again. In the meantime we upgraded the size of our flies upon his indication.

We were ready to strike the water, but Moquim called in a strategy session, and here the secret was revealed.

He asked us what we would do. We, the experienced anglers, understood that he was going to pole around avoiding the water disturbance produced by the motor, so we just said so and simply asked if the cane´s length would be enough for the middle of the lake. Our simple minds imagined the conventional contour trip with our backs to the center of the lake following the shore line and trying to enjoy some sight fishing given the clear waters. Moquim nodded his head with a smile and asked us if we came for the parents or the kids. Our arms started spreading in the universal “big one” gesture. Broad smile in Moquim´s face now. 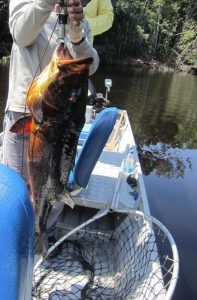 Here´s the thing: these small lagoons work like a household. Peacocks are territorial and don´t move much. You have to think of the floor-plan as concentric circles that have the bulls eye at the center of the lagoon where you have to be fully concentrated to detect the activity, the bubbles of Mama and Papa. This means that you will have to cast towards the center with the shoreline at your back, so distance management is essential when calculating your back-cast considering that you should never touch the water. Touching the water initiates a chain reaction with the kids (filhotes) and

fully alerts the parents and the big brothers. So no unnecessary noises, no motor, and don´t touch the water without a purpose.
amzon peacock bassNeedless to say Moquim was dead right. We followed the agreed tactics, each doing our part to the best of our ability, and

although I must confess to a few tangles in the lianas and some back cast unintended splashing we finally landed an outrageously beautiful 22lbs peacock bass. Without the slightest hesitation Moquim found the exit, and we left this hidden lagoon with a nice picture of our trophy in our memories and cameras.

We visited two more lakes during the day but non was comparable to the experience of fishing a giant peacock bass in a hidden lagoon in the Amazon basin for the first time.